It’s coming up on a year. Covid-19 was already in the news but for the most part, the virus hadn’t really penetrated most people’s awareness yet. There was talk of a severe epidemic in China, and pictures of people wearing masks in Beijing were showing up, but in most parts of the world, there was no real concern yet.

Since then, several million people have died globally, face masks became political statements, and the bulk of office work done worldwide now takes place in people’s spare bedrooms. We have all learned how to Zoom (and what Zoom fatigue really means) and workplaces and schools are still mostly empty as remote work and remote schooling become the new normal.

There is a common misconception that evolution involves changes that happen incrementally. That’s not completely true. Evolution, when you get right down to it, is how an organism adapts to a changing environment. Change brings stress. Stress forces adaptation. If the adaptation is beneficial, the change gets incorporated. If it doesn’t, the species (the survivors) remember that too.

Most of the world has been on a massive roller coaster ride of change as innovations and the stresses those innovations wrought created a vicious spiral, but that change has been bursty. The exploitation of oil as a fuel source, techniques for iron hardening, learning how to make use of light waves for communication, the advent of the industrial age, radio, television, electronic networks, and computers, the Internet, each of these things accelerated change in our society because they were stressful and challenged the status quo.

Covid-19 has done the same thing, by forcing us to learn how to adapt to become an increasingly digital, disconnected society. These changes would have happened regardless, but they would have taken ten to fifteen years longer to play out had the virus not forced us to speed that process up. Digital Transformation has become yet another punctuated equilibrium, and what drives that transformation, ultimately, is the need for information, aka data.

We are all becoming data scientists, whether we want to or not, because each one of us recognizes that we generate information simply by living. Until recently, there was no way to capture those data streams, those lifestreams, but increasingly there is, through a vast network of cameras and sensors and actuators (robots and drones). These streams of data drive systems intelligent enough to respond to specific patterns of information to achieve specific goals. This is what digital transformation is all about – creating organizations (and even individuals) capable of responding to the shifting contexts of existence and reconfiguring themselves (i.e., adapting) to meet future needs. Digital Transformation is evolution in action.

This is why we run Data Science Central, and why we are expanding its focus to consider the width and breadth of digital transformation in our society. Data Science Central is your community. It is a chance to learn from other practitioners, and a chance to communicate what you know to the data science community overall. I encourage you to submit original articles and to make your name known to the people that are going to be hiring in the coming year. As always let us know what you think.

Picture of the Week 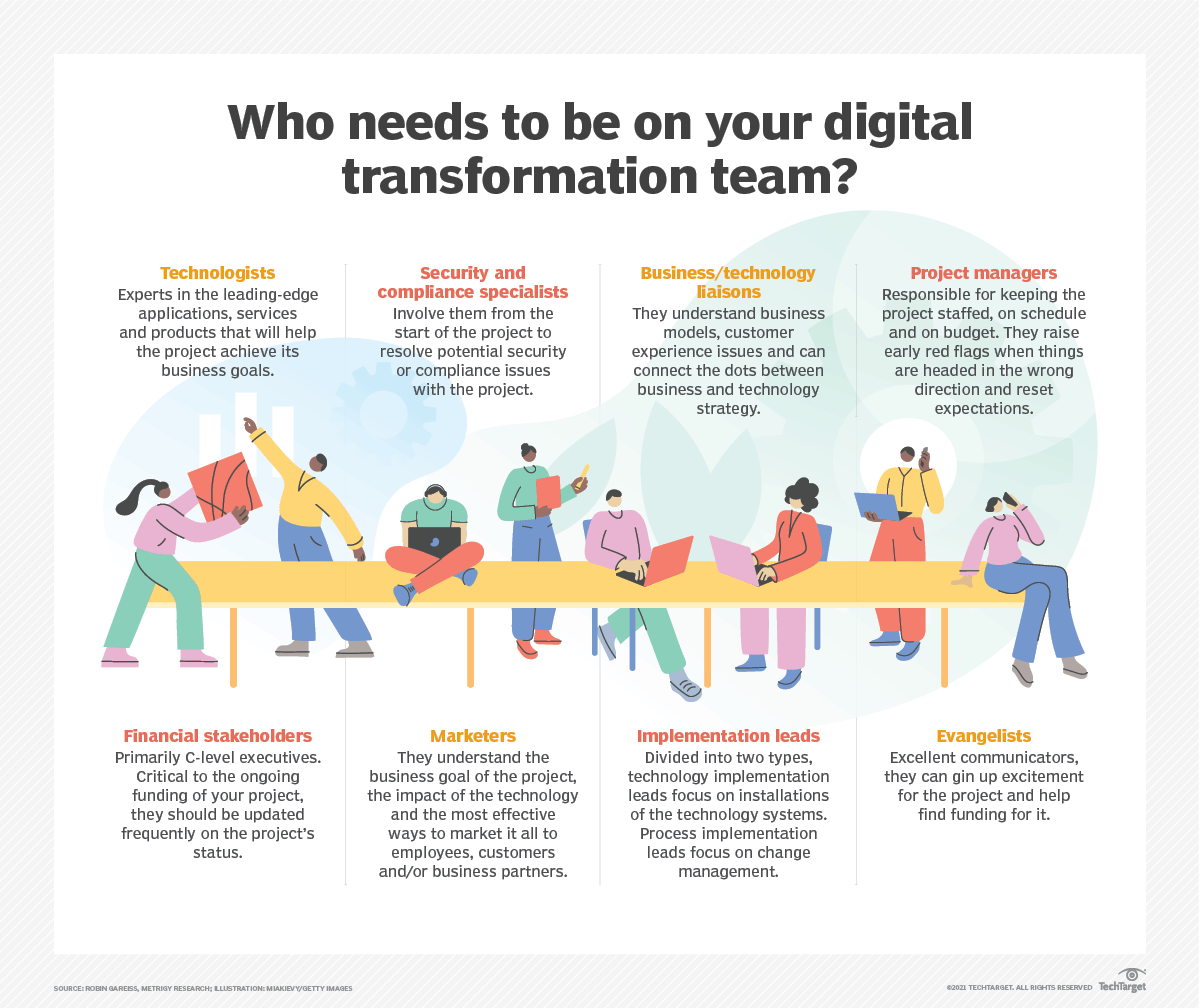 Who You Need On Your Digital Transformation Team

To make sure you keep getting these emails, please add mail@newsletter.datasciencecentral.com to your address book or whitelist us.
Subscribe to our Newsletter | Comprehensive Repository of Data Science and ML Resources

This email, and all related content, is published by Data Science Central, a division of TechTarget, Inc.

copyright 2021 TechTarget, Inc. all rights reserved. Designated trademarks, brands, logos and service marks are the property of their respective owners.